From newyork.seriouseats.com a picture of my favorite french fries, the ones from Five Guys. I don’t care how many calories or how many grams of fat they have; they taste great! Almost anything is OK in moderation. Besides, I exercise regularly: 30-45 minutes of running three days a week. I’m fairly certain that, except in extreme circumstances, diets of extreme exclusion are not optimal.

Disaffected Musings has readers in the UK. I would very much like to read thoughts from those folks on the results of yesterday’s election. I can’t say I am disappointed that the political career of Labour’s leader, whom I will not mention by name, is probably over. I am not a fan of socialist anti-Semites.

This CNBC article from yesterday reports of a possible FTC injunction against the criminal organization known as Facebook, or as I call it, Fack Fucebook. From the article:

“The injunction would likely seek to block Facebook from enforcing policies around how its apps interact and could keep the company from pushing forward with its plans to integrate its three messaging services, sources told the Journal. Some officials have expressed concern that Facebook’s plans to integrate Instagram, WhatsApp and Messenger could make it harder to unwind those acquisitions later on if the FTC chooses to seek such a remedy, a source told the Journal.”

I wish nothing but plague and pestilence on that evil company and its leaders.

Charles Williams Nash resigned as President of General Motors on June 1, 1916. GM founder William Durant had regained control of the voting stock of the company in May and despite being offered an annual salary of $1 million (worth about $25 million today) to stay with GM, Nash did not want to work with Durant.

That feeling is understandable as Nash had been promoted to President of GM in November of 1912 and cleaned up the mess that Durant had made before he was fired by the board of directors in 1911. Nash restored GM to organizational and financial health.

Anyway…Nash bought the Jeffery Company in 1916 and renamed it Nash Motors in 1917. He ran the company with a tight fist, which helped save it during the Great Depression. He retired in 1937.

Long way around…the company that bore the Nash name, in conjunction with British sports car builder Donald Healey, manufactured the Nash-Healey car, the first real two-seat, post-war production sports car made for the US market. People who don’t believe in luck should read this…Donald Healey was returning to Britain on the Queen Elizabeth ocean liner after unsuccessfully lobbying Cadillac to supply him with engines. On the same voyage was Nash-Kelvinator CEO George Mason. Healey and Mason met, bonded over their interest in photography, and reached a deal for Nash to provide the drivetrain for Healey’s project. The car, simply called the Nash-Healey, debuted in 1951, two years before the Corvette.

For the second year of production legendary Italian coach builder Pinin Farina redesigned the body and a classic (IMO) was born. From Bring a Trailer a picture of a 1952 Nash-Healey: 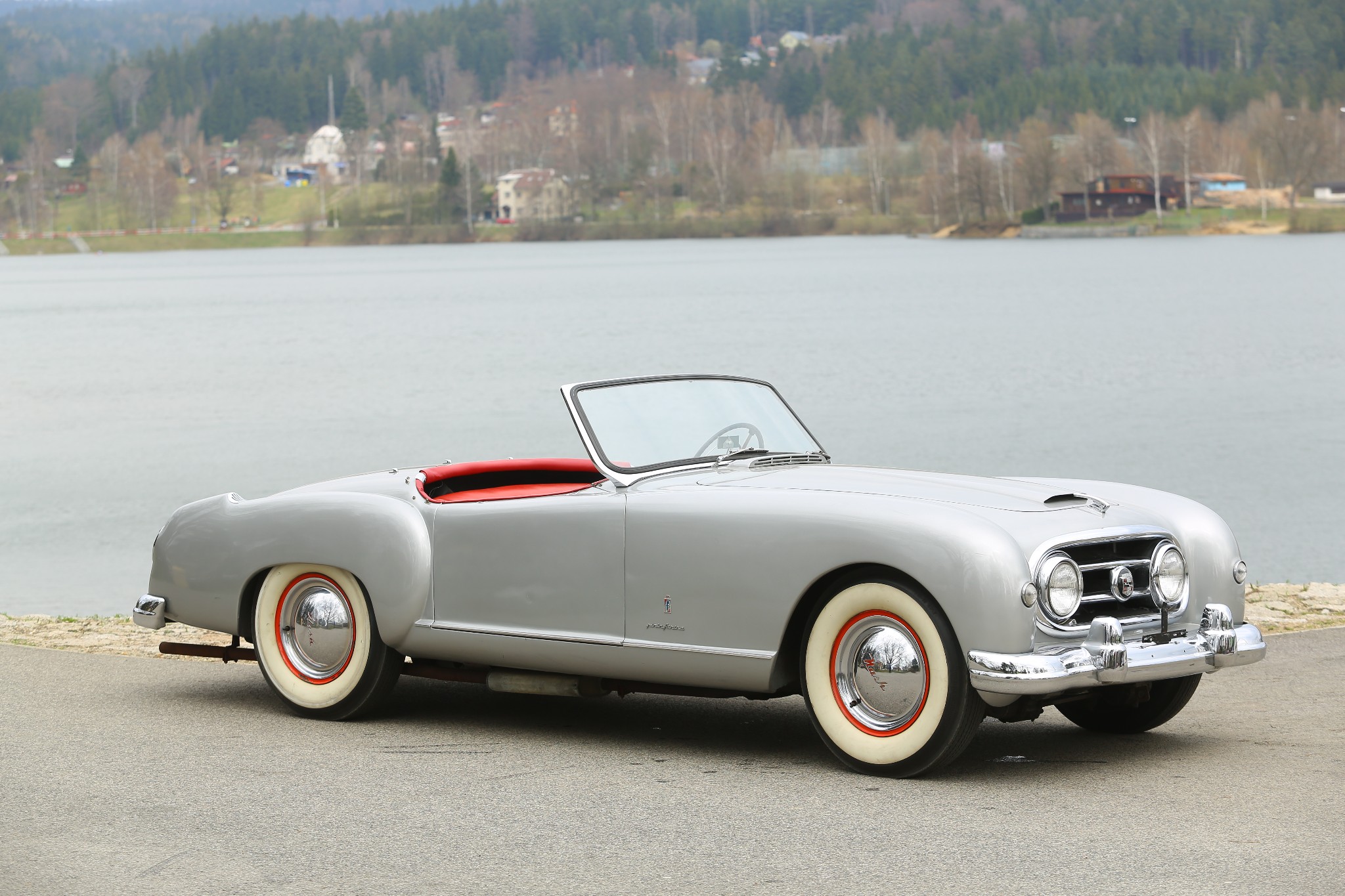 One of these cars figures prominently in an episode of American Pickers. The “Pickers,” Mike Wolfe and Frank Fritz, buy two of these from a father and son who own four of them. The one Mike buys proves quite stubborn in being moved and after a heavy thunderstorm begins attempts to free the car are halted (until the next day, if we are to believe the broadcast).

I think these are stunning cars to behold and while the Nash engine, a 125 HP inline six, was no powerhouse remember that Healey had intended for the car to have a Cadillac V-8. The engine bay was large enough for such a motor and some cars, like the one Mike Wolfe purchased, did have Cadillac engines installed to replace the Nash motor.