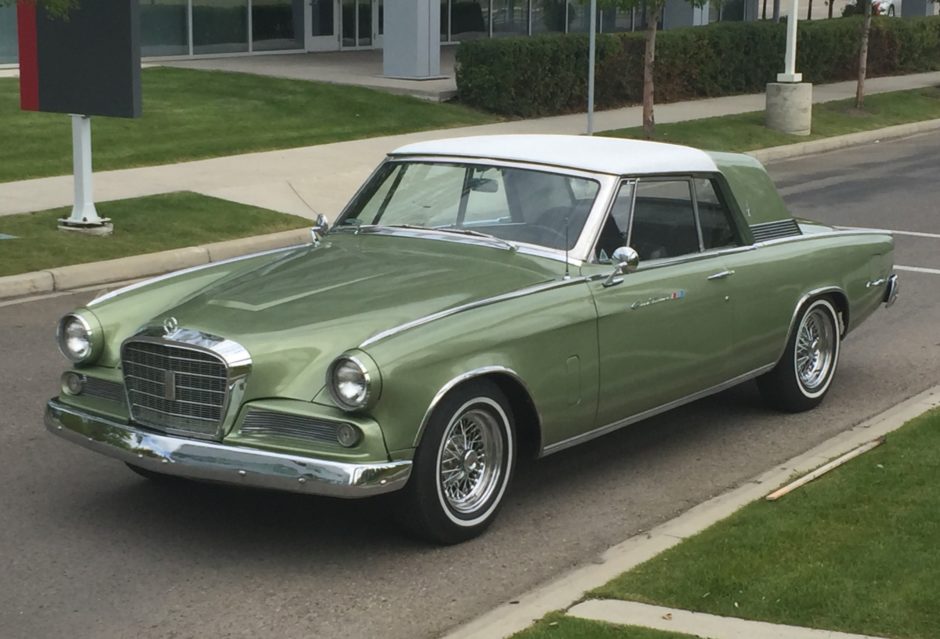 From Bring a Trailer a picture of an almost perfect 1964 Studebaker Gran Turismo Hawk. This is how I envision my GT Hawk looking if/when I buy it. Maybe I would want a slightly darker green, but this car just looks awesome to me. It even has both the clock and tach on the instrument panel. Fewer than 1,800 of these were built for model year 1964 before Studebaker closed its South Bend facility and the Gran Turismo Hawk (and Avanti) were no more.

This car was auctioned on BaT last July/August selling on August 2 for $15,250. I think that’s $16,012.50 with the buyers commission. Even though I have had the idea to buy one of these for quite some time, I wasn’t explicitly looking when this car was available. Had I known who knows what I might have done. I still had the BMW Z4 at the time and that could have been an obstacle. By the way, in the comments the seller claimed he had more than twice the sale price in the car and that the car was “all there.”

Money is important, but it isn’t everything. Albert Einstein once remarked, “Not everything that counts can be counted and not everything that can be counted counts.” I don’t ever want to be the type of person who knows the cost of everything, but the value of nothing. Car restorations should be a source of satisfaction for the person involved above and beyond the value of the build. By the way, I did not grow up with money and, as the saying goes, “You can’t take it with you.”

Perhaps inspired by my friend Joe’s very recent purchase of a 2016 Corvette Z06 convertible, I have decided to show an affordable C6 Corvette. From Car Gurus: A beautiful, modern Corvette with more than 400 HP for a little more than $20,000…that’s a great deal, in my opinion. What do you think?

4 thoughts on “Frugal Friday and The One That Got Away”