As I have written often, virtually nothing in life is all good or bad. Virtually everything is a trade-off. (By the way, this is going to be a very long post.)

Not being highly scrutinized by outsiders (a euphemism for not having thousands or tens of thousands of daily readers) means I have almost complete freedom to write what I want. In that way I can indulge my highly idiosyncratic nature.

Many people, especially those of a certain ideological bent, are highly critical of publicly traded companies buying back their stock. They think it is a “waste” of resources, but also that it distorts the stock prices of those companies by artificially inflating their Earnings/Share ratio through decreasing the number of shares in the float, the total available pool of shares.

If that were the case, then one might conclude that the stock price of companies that buy back their stock would perform better than those that don’t engage in buybacks, ceterus paribus. From the insightful Mike Santoli of CNBC comes these facts:

In the last five years the SPDR Buyback ETF (SPTB) has increased by…35.4%.

In the last five years the Invesco Buyback Acheivers ETF (PKW) has increased by…38.5%.

If a company’s float is reduced by 10% through buybacks, but the company’s earnings (profits) decrease by 20% what happens to the Earnings Per Share (EPS) ratio? A company’s stock price is, to a large extent, an estimate of the future value of its EPS adjusted somewhat for dividends.

Would I like to see companies spend more on capital investment and less on buybacks? Probably, but it’s not up to me. It’s also not clear that buying the stock of companies who buy back a lot of their stock is a good investment strategy, anyway. The reason for investing is to make money.

Today’s selection of Frugal Friday cars started with an impossibly large search on Hemmings and then morphed into something idiosyncratic and personal. I began by looking at cars from model year 1956 through model year 2005! The only filtering was that I looked solely at US cars and cars with listed prices and photos. I then sorted by price from lowest to highest. This car caught my eye: 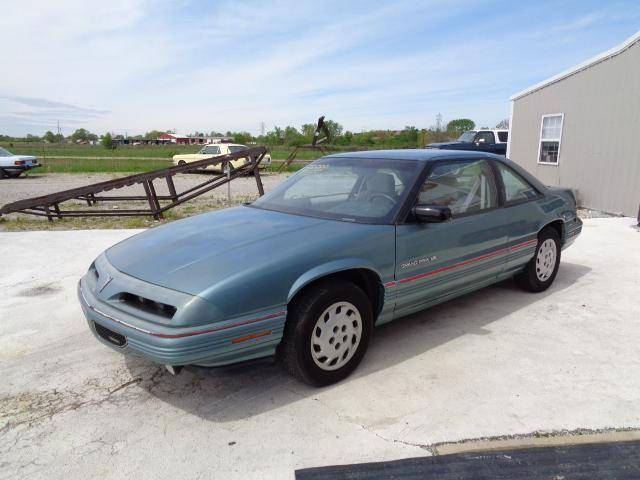 When I moved to California and was unable to buy a Buick Reatta I wandered the showroom of the Buick/Pontiac/GMC dealer until I saw a 1995 Grand Prix. I was really taken by the styling. I didn’t know it at the time, but this would be the car I owned the longest (at least as of now) and the first car I would own in two states as I took it to Texas when my wonderful wife and I moved there. When I bought the Grand Prix I had not even met my wife.

I also didn’t know at the time that I would soon be promoted to Director of Baseball Operations and be placed in charge of one of my pet projects, a department devoted solely to scouting the minor leagues. I won’t bore you with details, but I believe this has now become standard operating procedure for major league baseball organizations. I also had no inkling that as head of a department I would be able to receive a car allowance on top of my not-small salary.

The car I bought to replace the ’95 Grand Prix was this one:

This is a 2002 Corvette that I purchased used from Corvettes of Dallas in 2004. I think the business now operates under a different name. The ’02 was my first Vette and I had no idea at the time that I would become totally hooked on them and would, eventually, end up owning (at least) three Corvettes. From paintref.coma picture of a 2004 Corvette coupe:

Talk about an iconic car, it’s a little red Corvette. 2004 was the last model year of the C5 Corvette. The original particular example from Hemmings was in Red (OK, Burgundy) over Black and had about 101,000 miles. The asking price? $10,900…it was not the least expensive car in the search, either.

“Planning for the C5 began in 1988, a full nine years before the finished car hit dealerships…when planning began the goal was to unveil the new model for 1993, just in time for the Corvette’s 40th anniversary. However, in May 1989 a cut in the GM engineering budget delayed the release until 1994. Then in August 1989, General Motors pushed back the release date to the 1995 model year. In October 1990, the release was further rescheduled for 1996. Hiccups along the way included the fall 1992 retirements of chief engineer Dave McLellan and stylist Chuck Jordan…while General Motors posted a record $4.86 billion profit for 1988, four years later it lost a staggering $24.2 billion. Through it all, certain factions in GM management viewed the ultralow-volume Corvette as an unnecessary frill and lobbied for its termination.”

So, not only was the Corvette almost killed after the 1955 model year it was almost terminated in the 1990s. Who knows? After the 2008 recession calls for the end of the Vette may have grown quite loud at GM.

Getting back to Frugal Friday…my search on Hemmings for 2000-2004 Corvettes (US only, only with photos and listed prices) yielded about 50 with an asking price of less than $20,000. When the average “transaction” price for a new US vehicle has reached nearly $40,000 don’t you think spending half of that on a Corvette is a great option if you don’t have kids?

Even though I have written a lot today I want to continue, but I will stop here. Please feel free to post thoughtful comments. Thanks for reading.