First…as I have often written it can be hell to live inside my head. A couple of nights ago I had yet another disturbing dream. A doctor was telling me I had a pancreatic tumor, but that he was 99.9% sure it was benign. However, he kept asking me to spell “benign” and, somehow, I inferred that if I couldn’t then maybe the tumor wasn’t benign. In the dream I couldn’t spell the word.

My mother died of pancreatic cancer.

Maybe the collector car market is softening because wealthy people are buying…thoroughbred horses. A filly sired by 2015 Triple Crown winner American Pharoah sold for $8.2 million at the September yearling sale at Keeneland in Kentucky. That’s the highest price ever for a filly at the September Keeneland sale.

OK, then Car of the Year was the Buick Riviera. The Riviera, with its great blend of American and British styling, took the personal luxury car to a new level. Try again…

All right…going off the range then Car of the Year must have been the Studebaker Avanti. The Avanti had unmistakable styling and was a good performer, too. 0-for-3…

Motor Trend’s Car of the Year for 1963 was actually the entire line of Rambler cars by American Motors Corporation. The Rambler was cited for “engineering excellence and outstanding design achievement.” This was the first Motor Trend Car of the Year award for a non-Big Three company.

Rambler was on a roll during this period in its history. In model year 1961 it was the third-best selling make in the US behind only, of course, Ford and Chevrolet. AMC Chairman and President George Romney had steered the company through the teething pains of its beginning as a merger between Nash and Hudson and had positioned AMC as sort of the “anti-Detroit” selling sensible, efficient cars while the Big Three were selling horsepower, chrome and fins. In 1963 Rambler finished just a few thousand units out of fourth place in the US car sales race. 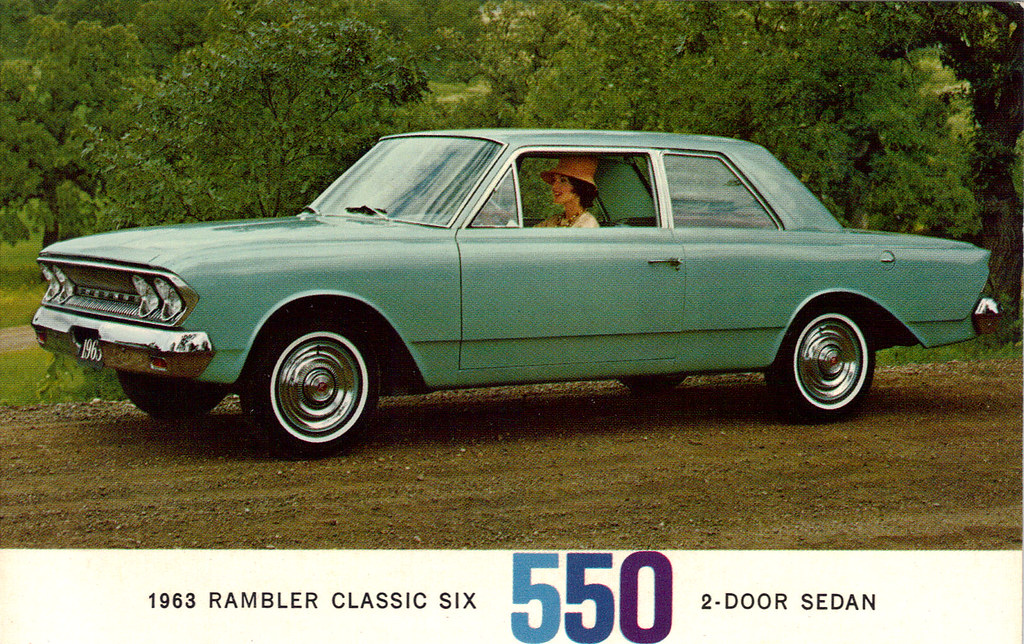 From AMC via flickr a picture, obviously, of a 1963 Rambler Classic Six 550 2-door sedan. AMC offered quite a few body styles and engines for 1963. The Classic series alone offered ten styles, six sedans and four station wagons. The inline-six came in four different power configurations and AMC offered two different displacement V-8 engines. The smaller 287 cubic-inch variant was available as an option on the Classic line.

From en.wheelsage.org a picture of a 1963 AMC/Rambler Ambassador 990 2-door sedan. The Ambassador was only available with the company’s larger V-8 engine of 327 cubic-inch displacement. The lower output version of this motor produced 250 HP/340 LB-FT of torque.

I can understand Rambler receiving the prestigious award although I prefer the three cars I mentioned at the beginning. These Ramblers are cleanly styled and had engineering developments such as one-piece “Uniside” door structures, a US first, that saved weight, increased rigidity and reduced squeaks and rattles. Everyone together now…fewer companies manufacturing cars means fewer potential sources of innovation in styling and in engineering.