I am grateful for the quantity and quality of Mecum auction broadcasts. Last night another of my many physical “crises” kept me awake from midnight until about 4 AM. When the acute phase of the crisis passed I needed something to calm me down. I had two new Mecum broadcasts from the recently concluded auction in Dallas recorded so I watched the shorter one. Words are really inadequate to describe how much I enjoy watching those telecasts. Thanks to Mecum, to NBCSN and to both crews.

This article on allpar.com by Kelsey Wright is the best I’ve ever read on Kaiser automobiles. This passage was particularly interesting:

“Jack Mueller wrote, ‘The Kaiser body shell for the 1949-50 model run was, in four-door sedan form, the same basic shell as 1947-48; overall length changes reflect [the revised] design of front and rear bumpers and bumper guards to get a couple of inches here, a couple there, that sort of thing. The problem was that, in 1949, most other car companies either rolled out a new body platform for the model year (Big Three and Nash), or a good facelift of a recently released design. Additionally, Kaiser-Frazer had too many smaller dealers that could not or would not start selling the way the Big Three stores started doing that year. [Another] big problem is that Frazer turned in his resignation as president at the end of 1948. Frazer saw that the information from dealers showing 60,000 orders in hand, as of October 10, 1948, were made up of mostly bogus orders. That story is almost a chapter in itself.'”

The first car from the Kaiser-Frazer Corporation was for model year 1947. Henry Kaiser was so successful at building ships that many call him the father of modern American shipbuilding. Joseph Frazer was a long-time “operative” in the automobile business, beginning as a mechanic’s assistant in his brother’s Packard dealership and then working his way up the sales/management ladder at many companies until getting into business with Henry Kaiser. (That’s decades worth of story in two sentences. Indulge me.)

At first, Kaiser-Frazer was successful as the Big Three automakers used the postwar sellers market as a way to sell warmed-over pre-war cars. Kaiser-Frazer had a market share of more than four percent for model years 1947 and 1948. Ultimately, their inability and/or unwillingness to “get with the program” in terms of styling and engineering led to their demise in the US in 1955. Henry Kaiser is supposed to have remarked, “Slap a Buick nameplate on it and it would sell like hotcakes.” 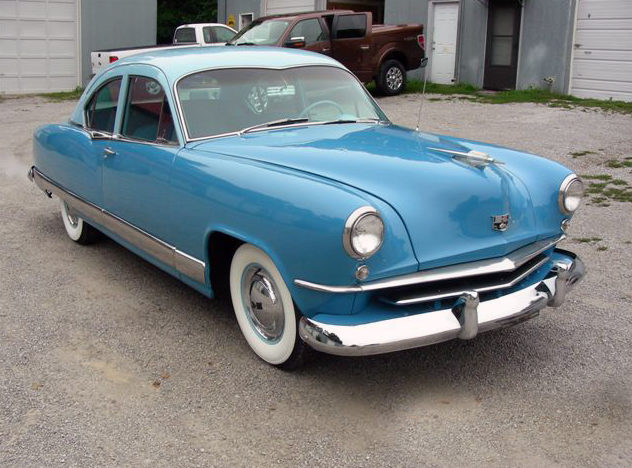 Speaking of Mecum here is a picture of a 1951 Kaiser Deluxe Sedan (yes, a 2-door sedan; I don’t want to open that can of worms) offered at their Kansas City auction in 2013. With input from noted car designer Howard “Dutch” Darrin these cars are appealing aesthetically, in my opinion. About 11,000 of these were built in model year 1951; total Kaiser production for that year was just shy of 140,000. All cars from Kaiser for 1951 (the Frazer part of the business ceased after model year 1951) were sold with the same engine: an L-head, inline six-cylinder motor of 226 cubic-inch displacement that produced 115 HP/190 LB-FT of torque.

The company, either as Kaiser-Frazer, just Kaiser or Kaiser-Willys (Kaiser purchased Willys-Overland in 1954) never offered hardtop coupes or sedans (cars without a visible B-pillar, a style introduced by GM in the late 1940s that proved to be quite popular), convertibles, station wagons or a V-8 engine. All of these types of cars became very popular in the early 1950s, but Kaiser did not have money for development and marketing.

Maybe Henry Kaiser’s lament about branding was partly true, but in a rapidly changing market his company’s inability to change with the times was their biggest problem. For the nth plus nth time I will opine that fewer companies making cars means fewer sources of innovation for styling and for engineering. The automobile as we have known it is not dead, yet.