With all my love, Happy Birthday to my (i)ncomparable niece! Ach and HVU to you, too!

In honor of her the first Frugal Friday listing this week is a car near and dear to her: 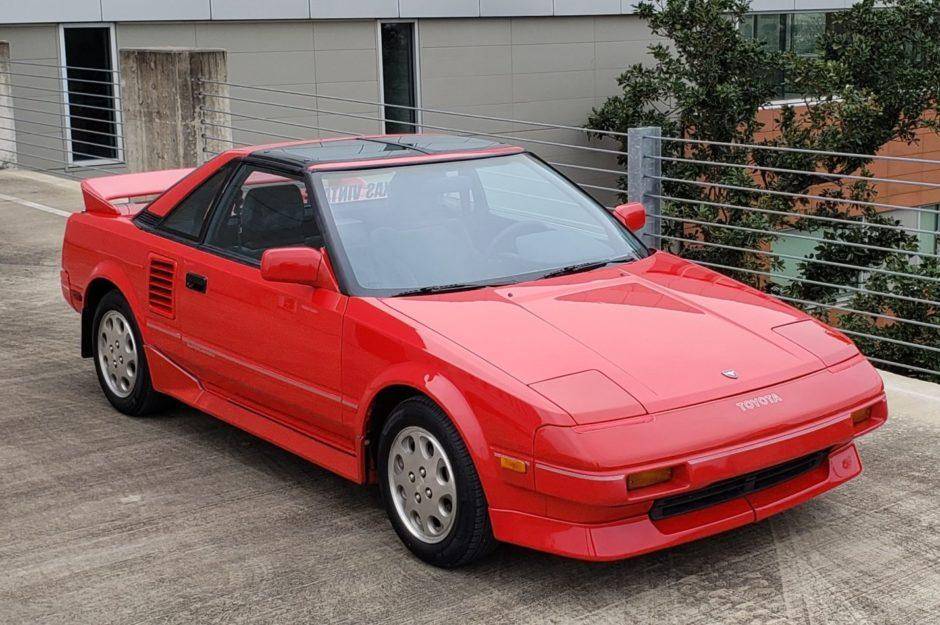 From this Hemmings listing a picture of a 1988 Toyota MR2 in Red over Gray/Charcoal. This is a supercharged version whose engine is rated at 145 HP/137 LB-FT of torque. Even with the weight of a supercharger and modified transmission, this type of MR2 only weighed about 2,500 pounds. About 8,000 MR2s were sold in the US in 1988 and probably just 10 percent of them were supercharged. Given those numbers, the asking price of $13,500 seems like a lot of bang for the buck.

In case you don’t know, or even if you do, these cars were mid-engined. My niece said hers was just an amazing amount of fun to drive and was the car that rekindled her interest in automobiles.

The MR2 was made from 1984 to 2007 in three generations. It was the first mid-engine car made by a Japanese manufacturer. The second generation (1990-1999) offered a turbocharged engine as an option that produced 200 HP/200 LB-FT, but for the third generation the emphasis was less on power and more on handling. From en.toyota-club.eu a picture of a third generation (W30) MR2:

I think that is a good-looking car. Except for a couple of damaged W30s on Hemmings I could not find one for sale anywhere in the US. Only about 28,000 of the third-generation MR2 were sold in the US; perhaps the lack of an automatic transmission, available in the first and second generations, hurt sales.

From this Autotrader listing a picture of a 2007 BMW M6 convertible in Silver over Black with a Black top. It is powered by a 5-liter V-10 engine that, when new, produced 500 HP/383 LB-FT of torque. It is mated to a 7-speed “automated manual” transmission. I think that designation is used so that manual transmission “devotees” (I might call them something else) won’t lose interest in the car. Oh, the seller—a dealer in Salt Lake City (a beautiful place, by the way)—is asking $14,936. The car has about 65,000 miles.

C’mon! About 15 grand for a good-looking V-10 convertible…even if it is German. Sorry, to me SUVs are necessary evils and I don’t care for pickup trucks at all. I want my car to be fun. A V-10 convertible sounds like fun.

What do you think? What kind of vehicle is fun for you?