Maybe it’s meaningless, but yesterday’s post with the title “A Database, A Database, My Kingdom For A Database” seemed to negatively affect blog traffic as the number of views was about 30% below the average since we returned from Hershey and the standard deviation of daily views in that time was quite small. (The number of views yesterday was almost two standard deviations below the prior mean.) Again, I might be adding two and two and getting six, but I guess the post title can matter. Did any of you at least get the Shakespeare reference?

Someone writing a book about Ken Caminiti, former major league baseball player and National League MVP in 1996 while with the Padres, has asked me twice for an interview. Caminiti struggled with substance abuse and died, primarily of a drug overdose, in 2004 at the age of 41. I have refused to be interviewed. This is what I wrote today in an email to the writer:

Next month will be 20 years since I left the Padres and my memories have faded substantially. I had little interaction with players during my time in San Diego. Also, I have had many bad experiences with journalists who have made up “facts” about me to suit some a priori narrative or have “quoted” me saying things I never said, sometimes about topics that were never even discussed. Just this April I gave a talk at my alma mater and despite my concerted efforts the story on the University website about me and the talk was filled with errors. Besides, with 350+ interviewees you don’t need to talk to me.

What do you think? Too harsh? Well, it’s too late as I have already sent the email. I actually think the email is quite restrained compared to what I could have written.

I watched some of the 24 Hours of Le Mans this year for the first time. I have a hard time getting my head around different classes of cars being on the track at the same time, but what do I know?! On this day in 1966, Ford cars (the legendary GT-40) finished 1-2-3 at Le Mans. I have written before about the feud between Ford and Ferrari that led FoMoCo to expend much money and effort to build a car that would defeat Ferrari at Le Mans. Supposedly a movie about the feud is to be released later this year. 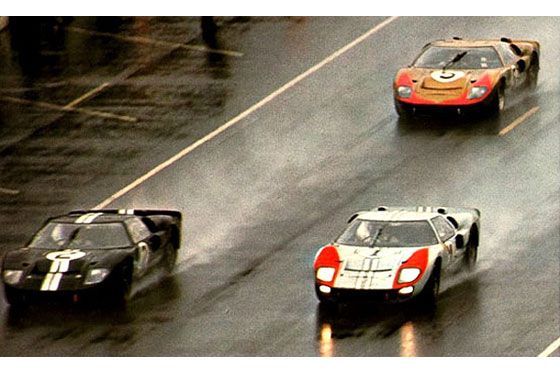 From Pinterest a picture of the finish at the 1966 24 Hours of Le Mans with the three Fords 1-2-3. Controversy existed about that finish as well, but since I don’t really know much about the race I’ll leave any exposition to any readers who know more and who want to comment.

4 thoughts on “I Guess The Title Matters…”