“Don’t forget to look out for Number 1, but make sure you don’t step in Number 2!”

– Rodney Dangerfield in Back To School, certainly uttered in earlier times by others

The first of three “original hybrids” in Ultimate Garage 2.0, the 1959 Facel Vega HK500 is an amazing looking car to me and it was powered by a Chrysler V-8. 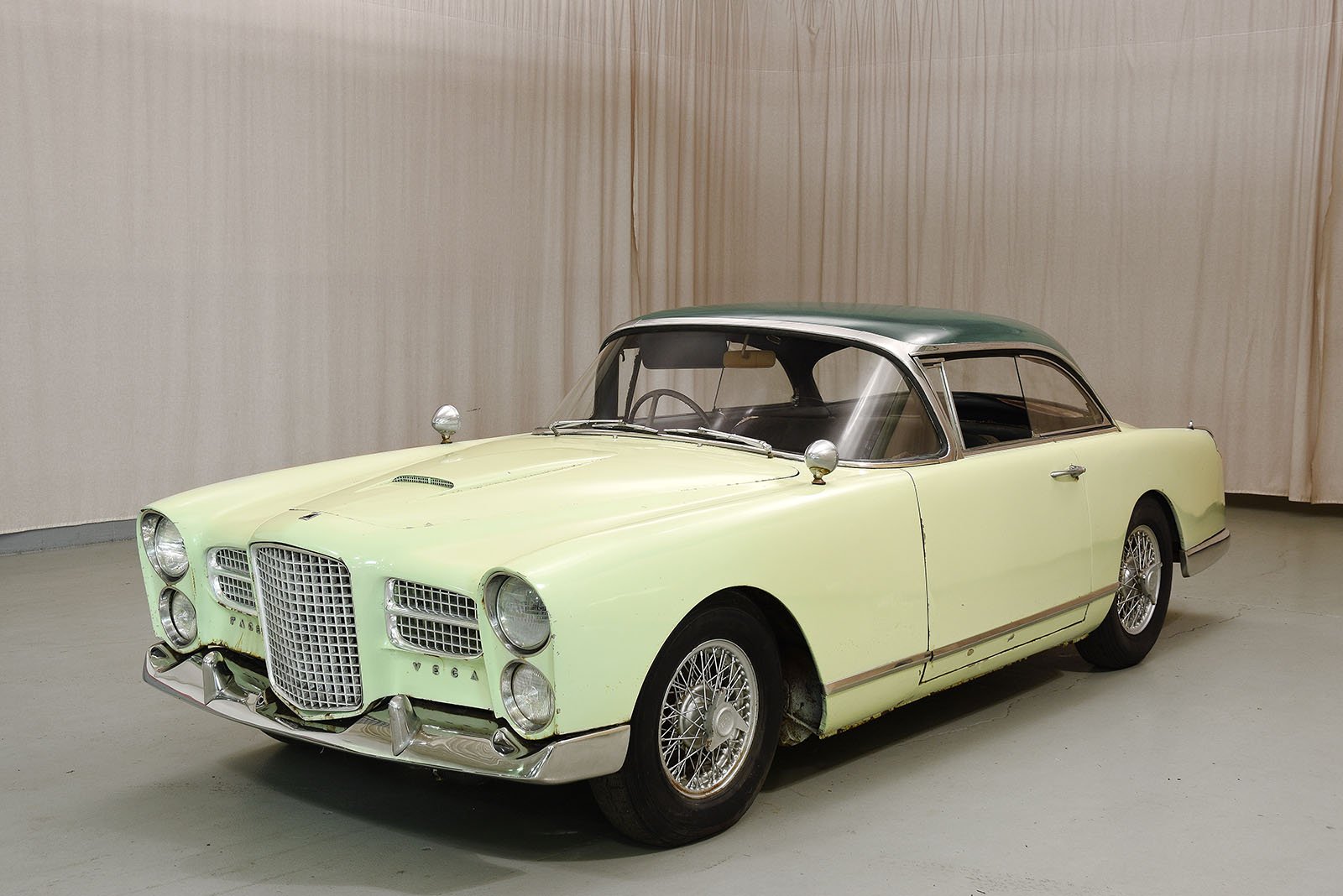 The top photo is from inspirationseek.com, the bottom from HymanLtd.com.

Facel was a French construction company founded by Jean Daninos in 1938, rather unfortunate timing obviously. They initially manufactured machine tools for the aircraft industry. After World War II Facel began manufacturing office and home furniture as well as car bodies for makes like Panhard, Delahaye and Bentley. Daninos wanted to make cars of his own and first showed original designs at the 1950 Paris motor show. The Facel Vega was introduced in 1954.

This car was really designed for export as France had very high taxes on high-output automobiles. The first Facel Vegas were powered by the 276 cubic-inch/4.5 liter DeSoto (Yeah!) Hemi; subsequently the engine was either a 291 cubic-inch/4.8 liter DeSoto Hemi or a 330 cubic-inch/5.4 liter Chrysler Hemi with output of 250 HP/340 LB-Ft of torque. The transmission could be either the two-speed Powerflite automatic or a 4-speed Pont-a-Mousson manual. By 1959 the engine was the Chrysler wedge-head 383 cubic-inch/6.3 liter V8 that produced 360 HP/460 LB-FT. The automatic transmission had been upgraded to a three-speed Torqueflite, but the manual was the same. Disc brakes were an option on the 1959 model, but became standard in 1960.

Facel also produced other cars such as the Excellence (a four-door hardtop sedan with rear suicide doors) and the Facellia (a smaller two-door design that could be purchased in convertible form, it was doomed by its engine designed by Westlake in Britain but built by Pont-a-Mousson). Believe it or not there’s a Packard connection to Facel. Most Packard aficionados have heard about the proposal to re-badge the Facel Excellence as a Packard. While Jean Daninos said he was unaware of such a proposal (although he never said he would have been opposed to it), the rumor continued to surface in numerous places over the years and made it into print in some of the very few books printed on the Facel Vega. Supposedly, the end of the idea came from Mercedes-Benz whose cars were, at the time, being distributed in the US by Studebaker-Packard and M-B didn’t want the competition. Would Packard still be around if that idea had come to fruition? We will never know…

Famous auto journalist Tom McCahill wrote this about the HK500, “[It] is sexier than the Place Pigalle and throatier than a Russian basso…[it is] a remarkable and wonderfully satisfying road companion.” Motor Trend wrote this about the Facel Vega, “[it] has as much show-stopping quality as the Continental (and maybe more), is finished in the impressive Rolls-Royce style, performs with the agility of the hottest American cars and handles as well as an Austin-Healey.” Famous people like Tony Curtis and Ringo Starr owned the Facel Vega. Unfortunately, the cars didn’t sell well enough to keep Facel afloat. The last Facel Vega was manufactured in September, 1964 and the company was liquidated in 1965.

As I have written before in this blog I do not believe in the famous axiom that if you build a better mousetrap the world will beat a path to your door. I certainly don’t believe that it’s always true. By the way, according to Hagerty the average value for a 1959 Facel Vega HK500 is $99,000. I have seen them sell for a lot more than that.

As always I welcome comments on the Facel Vega or on any other topic.