Before writing about John Unitas I want to mark the passing of another former NFL player, MacArthur Lane. Most of you have never heard of him, but he is the reason I am a Packers fan.

Lane was the St. Louis Cardinals’ first-round pick in 1968 at the age of 26, which is quite old to be drafted by the NFL. Lane did not go straight to college to play football after high school; instead, he worked part time in a machine shop for three years to earn money and went to junior college in Oakland—his hometown—to improve his grades before enrolling at Utah State, where he played with his younger brother, Sidney. MacArthur Lane had a great year for the Cardinals in 1970 earning Pro Bowl honors. Unfortunately for the Cardinals they blew a shot at the playoffs that year by losing their last three games to finish 8-5-1. For some reason, and who can always explain the reasons we form attachments especially as children, I became a big fan of Lane that year.

He was traded to the Packers in February, 1972 and helped lead them to the NFC Central title that season. As Lane became a Packer I became a Green Bay fan and have been ever since. He died on Saturday in Oakland at the age of 77.

On this day in 1933 John Unitas was born. He was my favorite football player growing up and is still my favorite football player ever. In some ways Unitas was the Baltimore Colts. Baltimore had always been a blue-collar city and Unitas was the ultimate blue-collar player. His story is well-known: his father dies when he was five, he wasn’t big enough to play at his dream school—Notre Dame, didn’t pass the entrance exam at Pittsburgh, where Unitas was born and raised. After attending Louisville he’s drafted in the 9th round by his hometown Steelers, but was released without ever playing in an exhibition game. After playing a year of semi-pro football for $6 a game, he’s signed by the Colts to back up former first-round pick George Shaw; Shaw gets hurt and the rest is history.

From my football book here is the article I wrote about Unitas as part of the chapter on the 1958 Baltimore Colts: 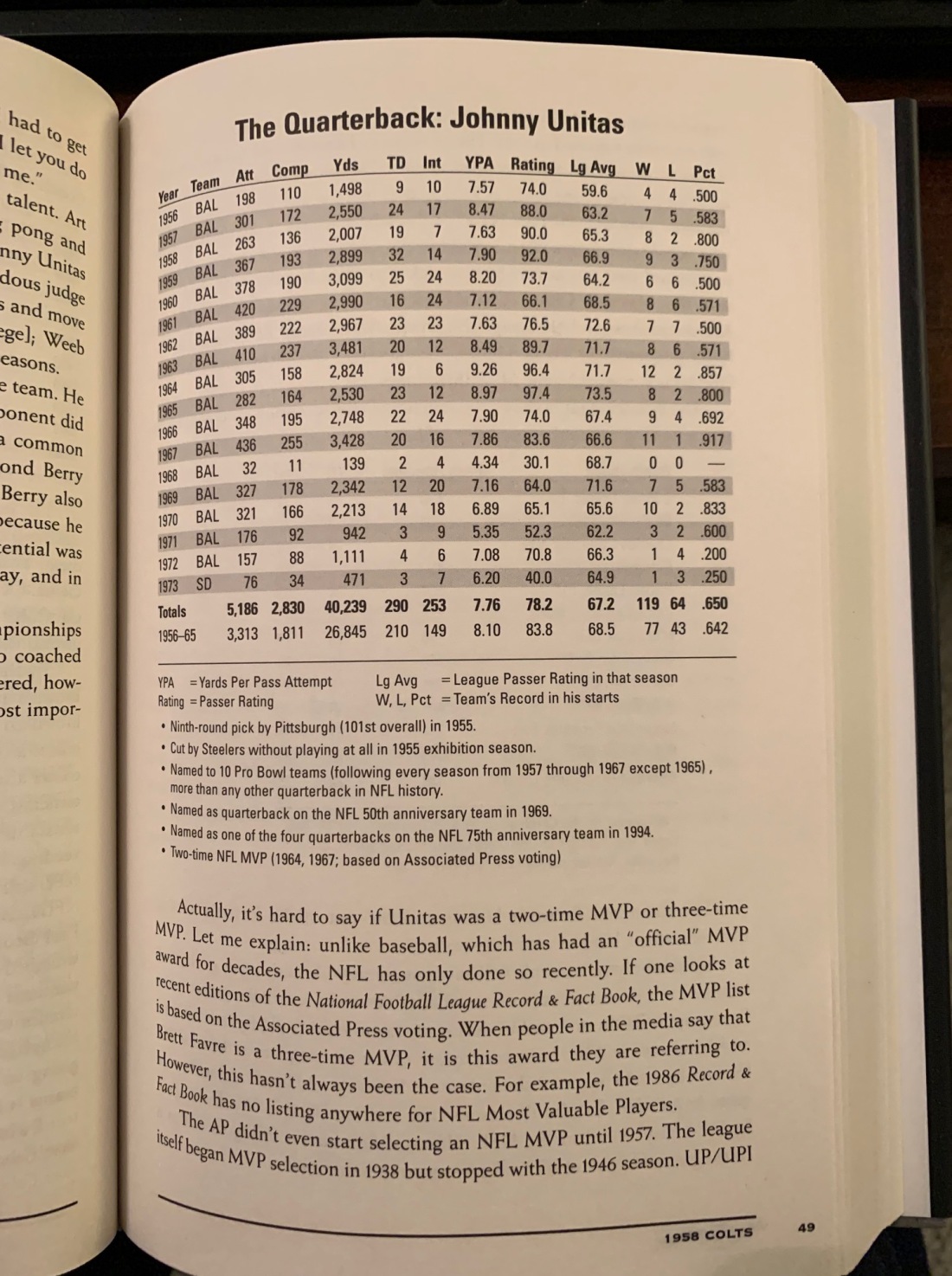 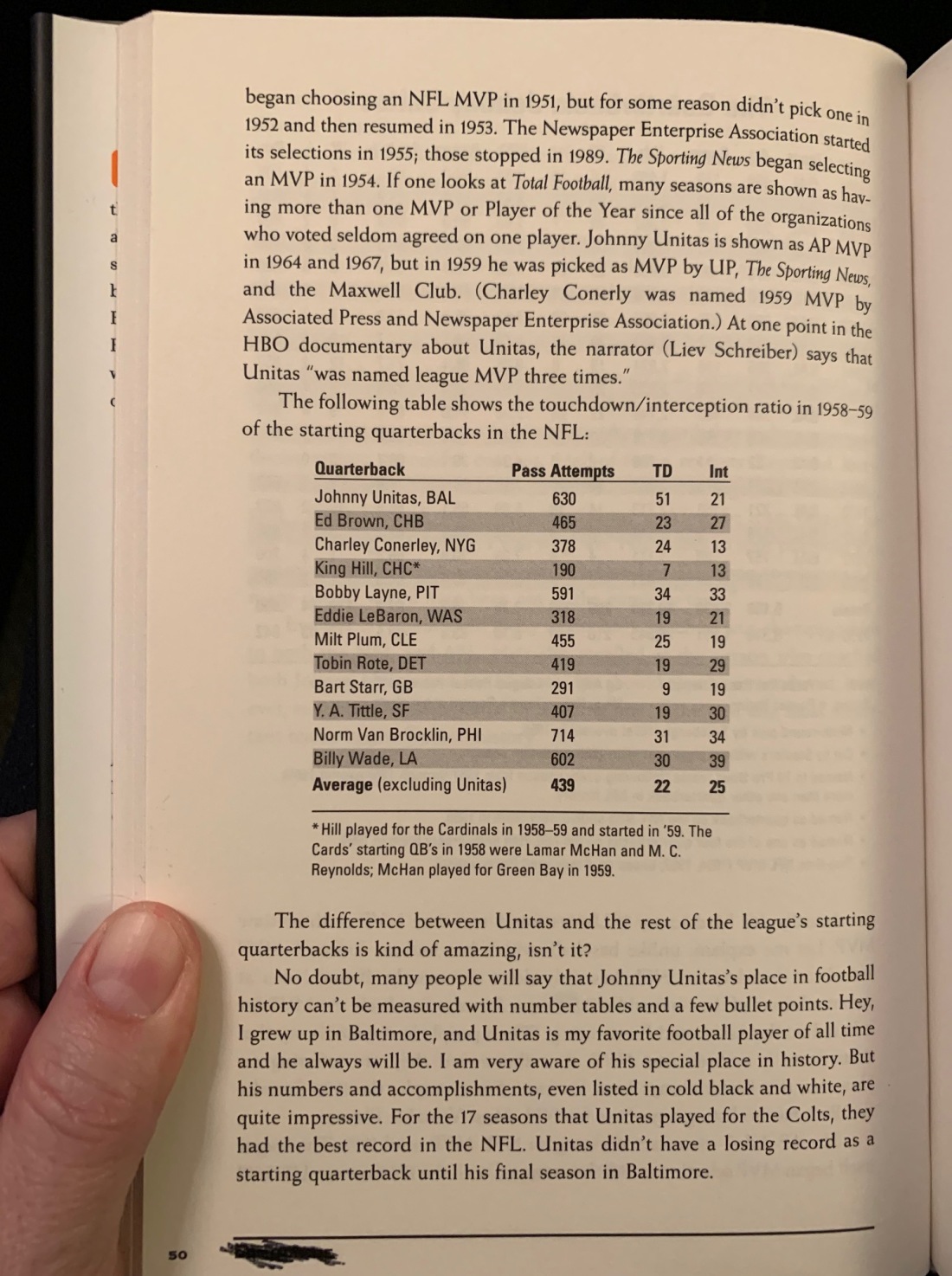 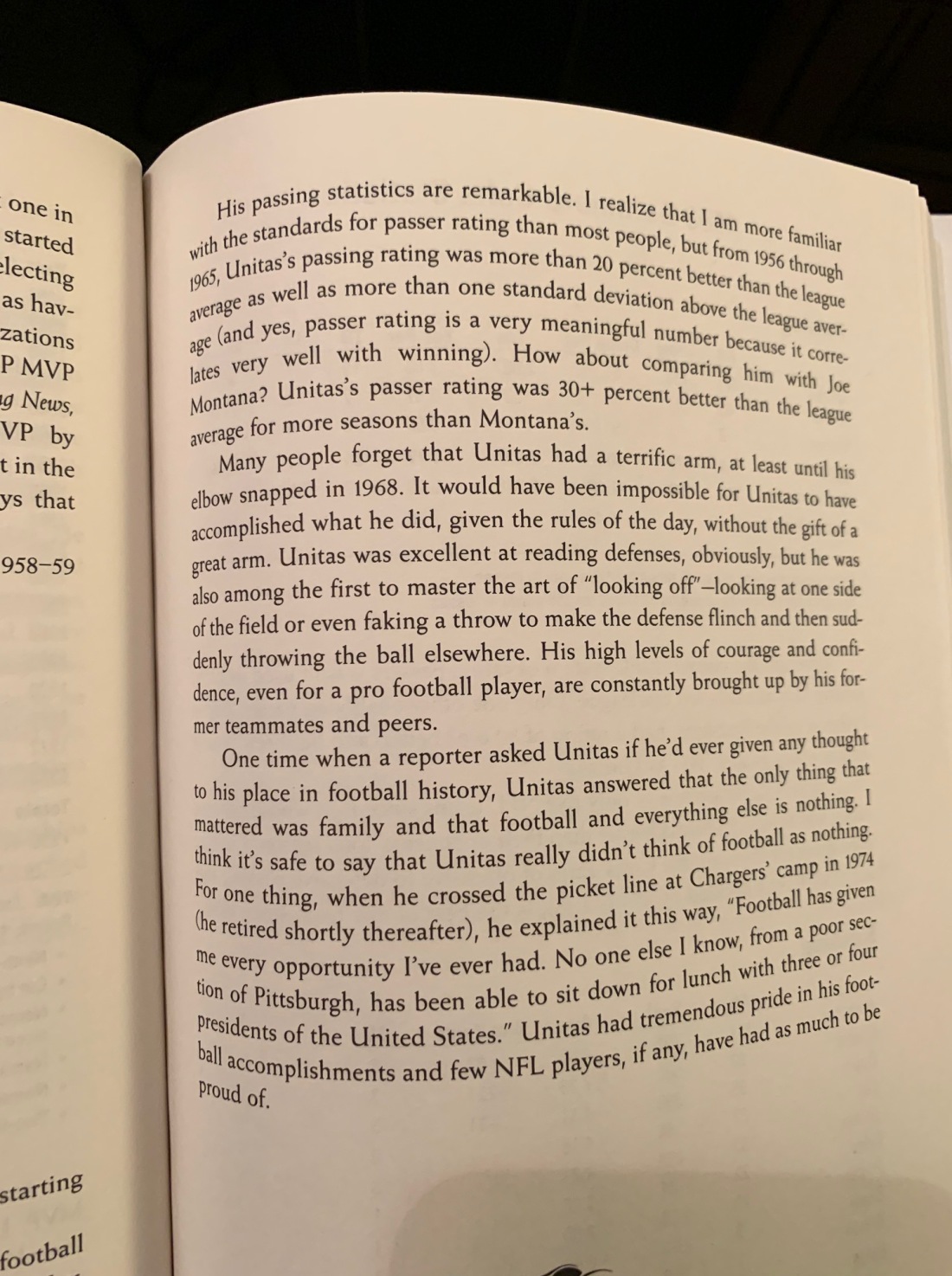 Hey, I wrote the book and I don’t need permission to show parts of it here. Sorry my thumb is in the shot of one of the pages.

As I recently wrote it seems to me as though Unitas is not remembered much today. In my opinion, though, the discussion of the best quarterbacks of all time has to start with Tom Brady, Joe Montana, and John Unitas.

2 thoughts on “Happy Birthday, Johnny U!”