Please read this post. Thanks, title notwithstanding it’s not a ragu recipe. The fact this post has received almost no views is another example that timing matters.

The recently concluded month had the second highest number of blog views (behind November, 2018) and the second highest number of comments (behind December, 2018). The number of comments is more surprising given that this blog’s two most prolific commenters, 56packardman and Steve Dallas, have not commented since long before March 1. I am pleased that more people seemed to be reading Disaffected Musings in March, but still think that this blog should have five to ten times the number of views it receives.

This post generated about nine percent of all views for March; this post, that was actually written and posted in February, generated about six percent. The number of views for the first post were due to Bill James re-tweeting it and I thank him, once again.

Almost all of us are vain to some degree and almost all of us have an ego that likes recognition. I am no different and don’t pretend to be. I am proud of this blog and think it is of high quality. The Internet doesn’t seem to agree although, of course, one could argue (and I have) that success on the Internet is correlated with catering to the lowest common denominator. This blog is what it is and I am what I am.

Mecum’s next auction begins on Thursday; the venue is Houston. Many interesting cars are being offered, but also many pickup trucks in which I have no interest. The Barrett-Jackson auction in Scottsdale in January seemed to be almost nothing but pickup trucks and restomods. Sorry, but to me pickups are boxes with wheels. 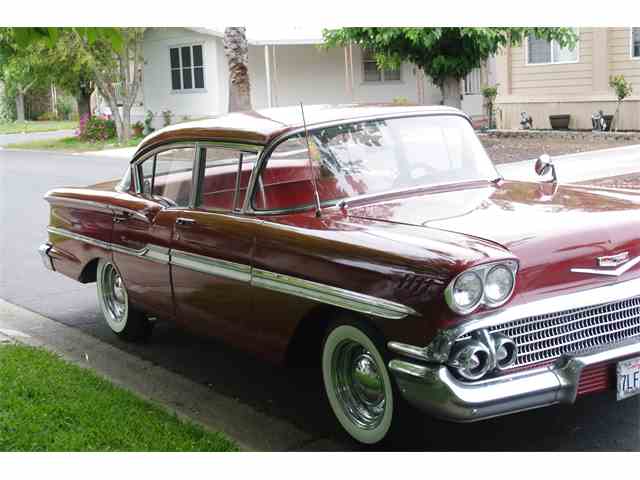 This is a picture of a 1958 Chevrolet Biscayne; a car like this will be offered at Mecum on Friday, April 5. Once again, Mecum does not allow its online lot photos to be captured; this picture is from classiccars.com.

In 1958 Chevrolet’s lineup changed. The hierarchy had been the BelAir at the top, the 210 in the middle and the 150 at the bottom. For 1958, not counting the one-year only Delray, the newly-introduced Impala was at the top, the BelAir was in the middle and the Biscayne, also introduced in 1958, was at the bottom. I must confess that I barely remember the Biscayne. When I was very young the only Chevrolets of which I was aware were the Corvette and the Impala. Of course, I’m no spring chicken. Getting back to 1958, I believe that all of these body styles were only produced for that year, sort of the ultimate in planned obsolescence. The Biscayne was only available as a 2-door or 4-door sedan and about 176,000 were produced in 1958.

Which college team do I think will win the NCAA Basketball Tournament? Which team do I want to win? I don’t know and I don’t care. In what seems like a paradox, Maryland’s 2002 championship ended my interest in college basketball. I grew up in Baltimore as a big Terrapins basketball fan; I guess I never thought I’d see them win it all so when they did I guess I didn’t think I had to watch anymore.