Not that they are likely to see this, but thanks to the readers from Finland who clicked on this post today after seeing a link in the Cadillac forum. In my previous blog hosted by the Evil Empire (AKA Google) about 15% of readers were from outside the US. For Disaffected Musings that number is just 6-7 percent.

David Banner recommended the idea that has become Frugal Friday; he is also the first reader to submit an Ultimate Garage. If you read the comments you would know this, but many readers do not. That’s a loss for those who don’t. Here is his Ultimate Garage:

1) Bentley Bentayga: because why not? The Cullinan is just too much, and the Bentley looks just as good in person. The perfect “I have no f**ks to give” vehicle.
2) Landcruiser/LX 450: luxury, durability, ability to carry seven live people or three dead ones. The Swiss Army knife of vehicles.
3) Aston Martin DB 11: because of James Bond, because of how it looks in two tone paint, because of all the other cars I have in my garage.
4) Rolls Royce Ghost: everyone should own a RR at least once in their lives, no?
5) Porsche 9114SC convertible: because my wife wants one…in silver with saddle interior…in manual…ASAP.
6) Ferrari California: because I want a Ferrari, because I want a convertible that’s not a pain in the ass re “rag top”, because it looks like sex on four wheels to me.
7) Chevy Malibu Hybrid: because sometimes you need to go over five hundred miles on a tank of gas in a car with a big trunk that can be fixed anywhere in the country. Trust me.
8) Porsche 928: in memory of a dearly departed friend who got me into cars and who owned one that was beat up but still was the perfect match for him. I tear up now even thinking about the first time I saw him step out of the car.

Of course, regular readers know I am not a fan of SUVs, no matter how luxurious, so none will appear in Ultimate Garage 2.0, but different strokes for different folks. The Ferrari California was included in my original Ultimate Garage and is a strong contender for 2.0.

I would love to post more of these from Disaffected Musings readers so don’t be shy!

I haven’t written of this in awhile, but I still have an unhealthy obsession with defunct American makes. I mean, look at my garage:

What does that have to do with Frugal Friday? This week, still using Hemmings, I searched for cars being sold by US dealers, but this week the car could be from any year and I lowered the price range to $5,000-$6,000. Look what showed up:

A 1955 Studebaker Champion listed at $5,450. Country Classic Cars has a large percentage of the listings in today’s search. They have suffered quite a bit in recent years being the victim of a large fire AND a tornado.

Anyway, back to the Studebaker…supposedly it has only 46,000-ish miles and is powered by the base 186 cubic-inch inline 6-cylinder engine. Studebaker built about 50,000 Champions in 1955, about 38% of their total output of approximately 134,000. Stude fans would think this a sacrilege, but if I were so inclined to buy it that purchase would be for the purpose of resto-modding. Anyone else with me? Of course, the car would end up costing WAY more than the list price. 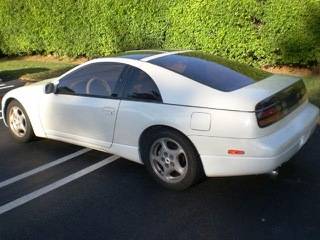 Sorry about the small picture…in honor of my wonderful wife who owned one of these, here is a 1990 Nissan 300ZX. The dealer is asking $5,600 and claims that a new transmission was installed a year ago. This is not the Twin-Turbo model, but is powered by a naturally-aspirated V-6 engine of 3.9 liter/181 cubic-inch displacement rated at 222 HP/198 LB-FT of torque. The twin-turbo engine was rated 280 HP/283 LB-FT.

My wonderful wife has owned a lot of cars including a Mach 1 Mustang, a Pontiac Trans Am, a Chevrolet Camaro, and a Jaguar XK-8 convertible. I think her current car, a 2015 Corvette, is her favorite but she speaks highly of some of her previous automobiles.

Any comments from readers on today’s Frugal Friday choices? Anybody there?