No doubt exists that I am angry at the world. I believe that I have been unfairly and inaccurately labeled as obsolete. That anger manifests itself in various ways.

Last night I had a dream that generated such intense feelings of rage that it awakened me. My wonderful wife and I were in a Best Buy store. In the dream this store was enormous, far larger than any such store in the real world. For some reason, and I don’t know if it was because no employee offered to help us, I became incensed. As my wife watched in horror I began running around the store, screaming and cursing at the top of my lungs and destroying merchandise. I dared the employees to call the police by saying, “They can’t catch me, either.”

The level of rage I felt was frightening to me. Obviously, I doubt that the dream was only about Best Buy.

An aside: I did have a very bad experience at a Best Buy store many years ago. It was such a bad experience that we stopped shopping at the chain. Do you want to hear the story? Hey, it’s my blog.

In early December of a year many years ago (we were still living in Texas, which we left about 11 years ago), I purchased a computer monitor at a Best Buy store. While I am not a computer savant I am also not a computer idiot. I could not get the monitor to work. I called the store three different times; no one ever answered the phone despite the fact that I must have let the phone ring more than 100 times in total. I decided to return the monitor. The customer service person seemed totally disinterested in me and my story. I went to another electronics store and purchased a monitor that I used until it finally gave up the ghost earlier this year.

I wrote a letter to the Best Buy CEO, recounting my experience and letting him know that to me it appeared as though the employees in that store seemed concerned only with what they could buy with their employee discount. I did receive a written apology and a pledge to correct the flaws in customer service at that store, but I didn’t receive any compensation, not that remuneration was the reason for my letter.

I wish I were not angry at the world. However, to quote Shakespeare, “If you prick us, do we not bleed?”

From corvetteblogger.com comes two stories about camouflaged C8 prototypes being spotted on the road very recently. So, will the car really be delayed by six months because of electrical issues or are we being faked out by GM/Chevrolet? As much of a Corvette fan as I am, I have almost reached a point where I don’t care if/when the C8 will be available to the public. Hey, I’m not going to buy one, anyway.

From Barrett Jackson’s website a picture of a car that will be sold at no reserve in Scottsdale next month and is exactly the year and body style I want: 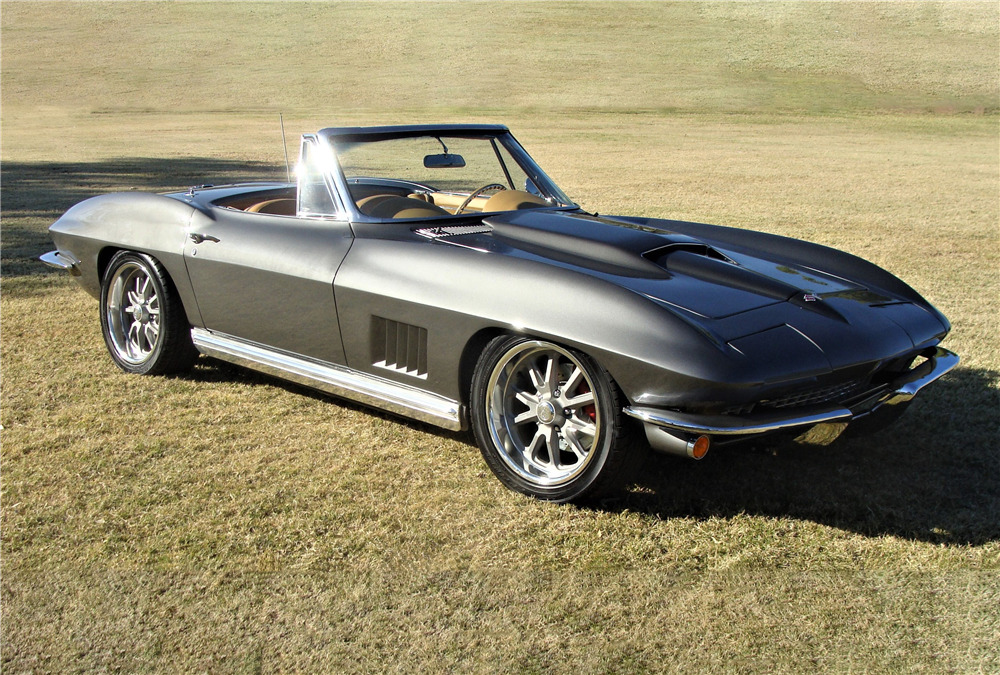 That is a 1967 Corvette restomod with a six-speed automatic transmission (I don’t want a four-speed nor do I want an eight-speed) and a modern LS3 engine (output unknown) in a color that looks amazing in the photos. I would have the stinger painted red and would find an auxiliary hardtop, but this car is very, very close to my ideal restomod. The big question is how much will it cost?

I am leaning more and more towards buying a car as opposed to building one. It will almost certainly cost less (I obviously won’t spend more than a build would cost) and take much less time to acquire. I have dreams (and nightmares), but I live in the real world.

4 thoughts on “Dreams of Rage”