Mittwoch, as in middle of the week, is the German/Yiddish word for Wednesday.

If you couldn’t tell I watch CNBC quite a bit in addition to viewing their website more than occasionally. Before the Federal Reserve increased the Federal Funds rate in December, 2015 after seven years at zero, CNBC devoted much airtime to when the Fed would finally start raising rates. One regular guest, who worked for an investment banking firm and who shall remain nameless, was insistent the Fed would not raise rates in 2015 or even in 2016. This person was almost crazed in insisting the Fed was not going to raise rates. I’m convinced “they” thought that rising rates would destroy the stock market and, therefore, hurt the company’s investments. This person looked quite embarrassed on the air the day after the December, 2015 rate hike.

So, what has actually happened since the Federal Reserve started raising rates in December, 2015? Through yesterday, the S&P 500 has increased 40 percent for an average annual compound rate of return of 13%, not including dividends. Can you get a 13% annual return in a bank? Yes, bank deposits are insured whereas stock market returns are not. Yes, many Americans are not invested in the stock market. (An aside: I believe that many who don’t save/invest are wasting their money. That is, for many people/families who don’t save/invest it’s more a matter of they won’t than they can’t. That’s my story and I’m sticking to it.) Still, nearly three years of rate hikes have not hurt the stock market.

Even at CNBC, which is supposed to be a credible source of financial information, people make statements based on personal bias and not based on empirical evidence. Everyone join in: neither people nor their institutions are perfect. I guess I could rant about the obsession with the yield spread between 2-year and 10-year US Treasuries and point out that the real predictor of US recessions is actually the 3-month/10-year spread, but I won’t.

From this CNBC article comes this chart of annual growth in US retail sales:

I showed this chart because 1) personal/family consumption is approximately 70% of GDP and 2) since the end of the “Great Recession” the growth of retail spending has been quite steady. The average growth rate for 2010-2017 was 3.7% and the standard deviation was just 0.6%.

Who owned this car? 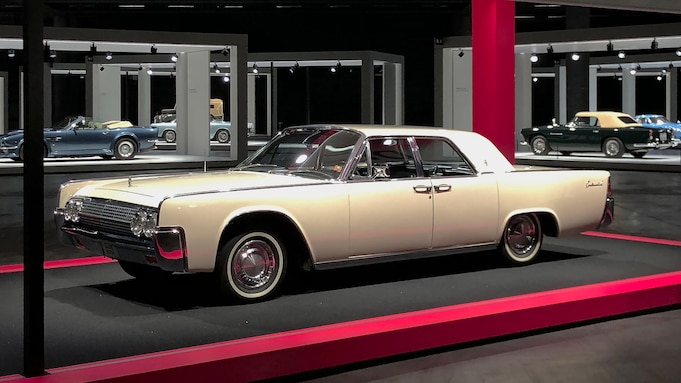 According to this article from Automobile Magazine this beautiful 1963 Lincoln Continental was the last car owned by Pablo Picasso. The car was shown at the Grand Basel event in, where else, Basel, Switzerland. From the Automobile Magazine article, “…Grand Basel, a highfalutin auto expo that borrows a page from Art Basel’s playbook: take the crème de la crème in rolling sculpture, light them like a Rembrandt, and celebrate them in a gallery-like space without the distraction of hard sunlight, cluttered surroundings, or gawking throngs.” The Grand Basel exhibition will actually be in Miami February 22-24, 2019 and will feature American cars.