This is just one article that shows data linking pork consumption to a whole host of medical problems. Here is how the Psychology Today article begins:

Did Leviticus get it right? Pork may still be dangerous.

If we were to rank popular meats by their healthfulness, the order would be (1) fish and shellfish, (2) ruminants (beef, lamb, goat), and (3) birds (duck, chicken, turkey). In last place would be pork.

Of course, the ancient Hebrews were forbidden to eat pork, and it’s commonly assumed that health concerns were behind the prohibition. Commenter George Henderson prompted us to look into the modern case for avoiding pork with this comment:  “Nanji and Bridges identified possible problems with pork plus moderate alcohol in 1985 and other researchers have confirmed the pattern since.”

Pork consumption has a strong epidemiological association with cirrhosis of the liver. Startlingly, pork may be even more strongly associated with alcoholic cirrhosis than alcohol itself!

The evidence was summarized by Francis Bridges in a recent (2009) paper, building on earlier work by Nanji and French. A relation between pork consumption and cirrhosis of the liver is apparent across countries and has been consistently maintained for at least 40 years.

Here is the correlation between pork consumption and mortality from liver cirrhosis in 2003: 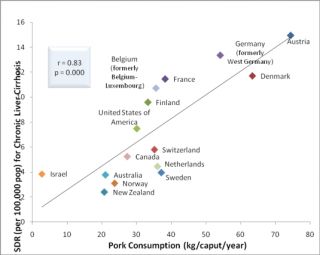 Some cites are not shown because WordPress didn’t want to show the URLs. Pork consumption has also been linked to multiple sclerosis. Psychology Today is hardly some crackpot publication.

I do not eat pork. Even though my mother was an Orthodox Jew, religion is not the reason for my pork aversion.